THE RALLY’S ‘LIBERTIES WITH LANGUAGE’ SERIES 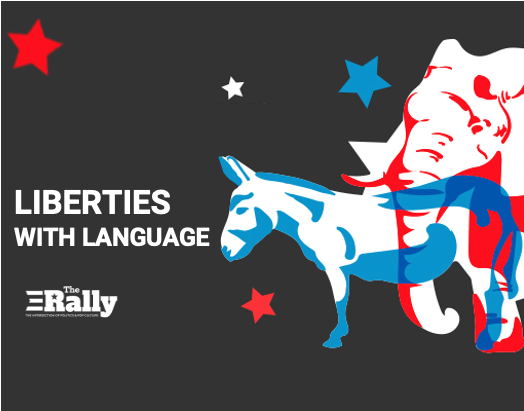 Don’t think anyone would argue that we, as a nation, recently experienced a most chaotic four-year-period. Some may even go so far as to call it combative.

No matter how you choose to refer to this questionable time in our country’s history, one thing is for certain – it forced us to question the integrity of our news sources and, as a result, motivated us to become more critical consumers of information.

Though troubling and disconcerting, there is an upside to the distrust we may now harbor towards the media and against the government. Whereby we can no longer accept what we hear or what we are told as the Gospel truth, we have been gifted with a vast array of fact checking and vetting resources that previously had not even existed.

This then leads us to introduce what we hope will be a regular feature in The Rally’s ‘Liberties with Language’. The column will strive to provide clarity around a word or phrase that is presently ‘trending’ in association with a recent political or societal development. The spotlighted subject may be a lesser-used word/phrase being reintroduced into society or an older word/phrase that has been given new life and/or is being repurposed to better fit with the ‘times’

The first entry in The Rally’s ‘Liberties with Language’ series is to draw a distinction between Misinformation and Disinformation, two words, which admittedly much used in 2020, left many perplexed as to how they differed from one another.  While both terms appear to apply to situations involving the public release of data or other factoids, mostly in conjunction with a news story – beyond that many (including myself) were lost as to the key points of separation.

Hence, we queried the Capitol Research Center (CRE), “America’s Investigative Think Tank, a self-funded, Washington DC-based organization which keeps watch on the spending habits and political/advocacy practices of foundations, charities, and other nonprofits to get their valued input.

Further, the CRE relayed, “Misinformation may start as disinformation and then circulate further through innocent error. But disinformation implies intention to mislead (like premeditated murder that involves planning and forethought).”

Hence, while the origins of misinformation can be attributed to that of an innocent (enough) error, in cases of repetition, what initially may have begun as inaccurate reporting can grow to become a troublesome issue.

In the case of ABC news reporter, Matt Gutman, who, in January 2020, was reporting on the breaking news story of Kobe Bryant’s helicopter crash and subsequent death of he and his daughter, et al passengers, he was suspended due to inaccurate reporting. While Gutman did not set out to misinform the public – due to time constraints and failing to properly verify the facts, he misstated that Kobe along with all four of his daughters had been on the plane and perished in the crash. While the incident could have led to immediate termination for Gutman, ABC, instead, opted for suspension and, in line with transparency policies, required the issuance of an apology statement.

The aforementioned reflects an example of the lessor of the two evils, misinformation. And, from the CRE’s perspective, the real culprits are those individuals who attempt to disseminate the more maligned version, that of disinformation. And further worsening matters, if caught, the person involved in the purposeful spread of falsehoods (particularly if they have malicious intent) often will try and dodge incurring a serious penalty by citing their Second Amendment rights and the protections granted under the Constitution of the U.S. regarding Freedom of Speech.

For this reason, the CRE explains, “Misinformation can never be entirely avoided, which is why major news outlets often have to issue corrections.”

The good news though is that in 2021, the majority of reputable news publications and media forums now have dedicated persons and/or departments to verify information and vet sources. While news sources only used to ‘need to be right for a day;’ that adage no longer holds water as a constant stream of inaccuracies can ultimately impugn the media forum’s reputation and discredit their standing as a trusted new source.

What can initially seem like a harmless error can (misinformation), if not identified and abridged or halted from further public circulation, rapidly spiral downward and be perceived as having a more malevolent purpose, e.g., intended to discredit someone or something.

Yet, offering a dose of realism, the CRE shared that due to time constraints and unreliable information, it is not possible for major news outlets to completely eliminate all traces of misinformation in their reporting.

Rather, best tact they can take is to try and minimize errors; raise editorial and newsroom standards for fact checking and vetting information prior to release; and, in the event, inaccurate information should slip through the cracks to become public, it is important to take ownership for the mistake (versus trying to covering it up) and issue an apology.

Thus, with the help for the CRE, though both mis and dis information speak to the idea of sharing information; yet that is where their similarities diverge. While misinformation is more like a careless mishap; its more sinister counterpart of disinformation is viewed to be a more intentioned and goal-oriented act of defiance.  Obviously, there is a clear and obvious disconnect between getting something wrong and making something up.

Despite, though, one being decidedly more serious than the other; the overriding problem is that there is no way, regardless whether intentional or not, to guarantee the amount of truth and accuracy contained in published reports.

For this reason (and others), perhaps the best approach to how we consume news is to adopt a healthy dose of skepticism. For, when we are all no longer willing to accept all stories at face value, we became more astute in our thinking and thought processing processes and less apt to be misled by fake news presented as real news.