Heidi M. Barker
Heidi M. Barker is a child of God, devoted mom, PR/communications leader and former network news producer. She is based in Miami and Chicago (you can guess which seasons she spends where.) Follow Heidi on Twitter, Clubhouse and Instagram @heidibmedia.

“Walk the roads my forefathers walked;
Climb the trees my forefathers hung from.
Ask those trees for all their wisdom
They tell me my ears are so young (Home!)
Go back, from whence you came (Home!)
My family tree, my family name (Home!)
For some strange reason it had to be (Home!)
He guided me to Tennessee (Home!)

Something was pulling journalist/scholar Deborah Douglas home. Home to the South, the launching point for so many African American families who journeyed north during the Great Migration. Home to the meaningful, familial spaces and places her parents, aunties and uncles had told her about for years. Home to the land on which her enslaved ancestors toiled and triumphed, persevered and perished, languished and eventually were liberated.

So in 2018, when a group of southern U.S. state travel offices collaborated to officially designate the Civil Rights Trail, a geographical connection of the cities, sites and landmarks of the Civil Rights Movement, Douglas seized a professional opportunity that would take her- and, teach her about- home.

The result is her first book, Moon U.S. Civil Rights Trail: A Traveler’s Guide to the People, Place and Events That Made The Movement. The requisite “Moon” in the title refers to the publisher,   known for its guides to global destinations. But Douglas’ book is much more than a travel guide; it is a rich historical treasure full of lessons and gems, the majority of which are not taught in schools.

“I was going to follow the (Moon) formula. They know what works. And I had some little extra fairy dust that I knew I wanted to sprinkle throughout,” said Douglas, in a telephone interview from her Chicago home. “We have all of these (civil rights) icons… and we don’t know how much longer we’ll be able to talk directly to these people. I wanted to give them the benefit of this platform.

“But it wasn’t until I wrote my first couple of chapters that I realized that it wasn’t just a travel book, it was a history book too. And that felt daunting, because I work at the intersection of journalism and academia. I take the academic approach very seriously. And I really wanted to make sure I got it right.”

For this project, Douglas’ journalistic skills perfectly complemented her passion for African American history. The timing of her research, visits and interviews coincided with the Black Lives Matter movement, which created an electric atmosphere charged by social justice.

“This is an ongoing movement,” she said. “It grows and it evolves. This is living history. The issues we were contending with then, we’re still contending with now. My book is an opportunity for us to interrogate where we want to stand.”

Douglas provides a level of specificity that astounded even her editors. She was committed to identifying lesser-heard voices and unearthing little-known facts to illustrate the depth and breadth of the Movement.

“People lack context,” Douglas said. “We’re walking around on a daily basis with a surface level knowledge, if that, of issues that will determine our generational fortune. And so I wanted people to understand the local context of the cities that I featured and to see how they all weave into an overall national narrative. So, people really get a clear sense with accessible language of what that Movement was about and what it has to do with them.” 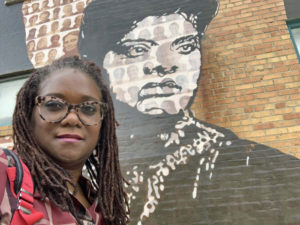 The Civil Rights Trail begins in Charleston, SC, which was the entry point for many enslaved Africans. Fast forward to 2015: Charleston is also where Bree Newsome Bass scaled the flagpole at the South Carolina State House to lower the Confederate battle flag. In her foreword for the book, Bass states that she hopes readers will be “inspired and empowered by making physical connections with the places and history” along the trail, which “hold palpable energy that propels you forward toward a greater understanding of your place in time.”

The sites, leaders, participants and facts of each city are far too numerous to list. From Charleston, the trail continues on into meccas of the Movement including Atlanta, where the Rev. Dr. Martin Luther King, Jr. was born, and the Southern Christian Leadership Council (SCLC) was formed; to Selma, where the Movement gained momentum with a focus on voting rights, and the pivotal march to Montgomery in 1965 was halted by Bloody Sunday on the Edmund Pettus Bridge; to Montgomery, where in 1955, Rosa Parks first sparked the Movement by refusing to give up her bus seat to a white man.

The trail then goes on to Birmingham, where Douglas experienced a painful and poignant epiphany while researching the 16th Street Baptist Church bombing by the Ku Klux Klan, which killed four Black girls.

“Birmingham actually lost six children that day,” she said. “There were two Black boys in completely separate, racially-charged incidents who were also murdered that day. So imagine being in a town, where it’s tight knit with all of these overlapping social circles, and how it must have felt for them to lose six babies.”

Douglas’ book continues on the trail highlighting the significant people, places and events in Jackson, MS; the Delta; Little Rock, AR; Memphis; Nashville; Greensboro, Raleigh and Durham, NC; Richmond and Farmville, VA; and Washington DC, where the Civil Rights Act was finally passed in 1964, and where the National Museum of African American History now houses so many artifacts of this incredible journey.

Douglas includes tips on where to eat, stay and even what to wear. Noting an opportunity to stimulate local economies, Douglas profiles restaurants, tour operators and other businesses, with a specific focus on Black-owned ventures. “When you’re planning your vacation and picking up brochures or books, or going online, very few arrows point to Black communities. I also look at this (book) as an opportunity to see the Movement securing our history and cultural spaces as an engine of Black wealth creation.”

Of course, no road trip would be complete without music, so Douglas created a Spotify playlist for the Civil Rights Trail. “I grew up on the road with my uncles playing blues and R&B in the car. So, I suggest songs tied to the situations, and the various towns and states. I wanted to re-create that feeling of music on the road.”

For those who want to learn even more, there’s good news: Douglas is starting a limited-series podcast that will be available this summer, and a traveling exhibit that will begin in the next year or two, for audiences to “touch the story in a way you may not be able to otherwise.”

Douglas’ journey home proved to be fruitful and complex as she traveled the Civil Rights Trail. She hopes her book is a useful tool to others.