HOW DENIM BECAME THE SYMBOL OF THE CIVIL RIGHTS MOVEMENT

⁣Denim is a daily staple in both America’s history and its ideology, too. From dusty gold miners in the late 1800s to the cowboys of the 1930s who made the popularity of jeans leap from workwear into the wardrobes of Hollywood stars like James Dean. The jean stands for something larger about the American spirit: rugged individualism, informality and a democratic respect for hard work. But while class and gender differences have been acknowledged and largely written about since blue jeans were first invented 147 years ago, the narrative has been mostly whitewashed, especially when it comes to discussions around race and Black America’s part in the history of denim.

A quick google of ‘denim history’ will pull up search results like Vogue encyclopaedia: The history of denim jeans which counts miners, cowboys, Hollywood legends, counterculture rebels, rock stars and high fashion alike over the last two centuries. Throughout the list, and like many more online, are familiar names like John Wayne, Marlon Brando, Bing Crosby and Marilyn Monroe. But while history likes to recount these figures in denim’s all-American tale, it’s not often that you hear about the freedom fighters who, in large part, helped bring the look to the mainstream.⁣⁣ 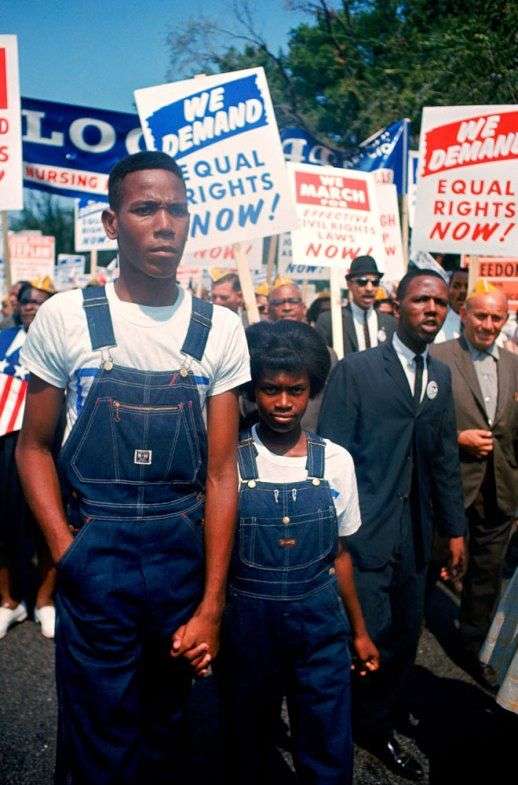 Whitney R. McGuire, an attorney for Creative Entrepreneurs and Co-Founder of Sustainable Brooklyn, backed up this sentiment in a talk during the 2018 Denim Days edition in NYC by saying that denim is more than “cotton, indigo, and rivets.” “Denim is a symbol of American idealism,” she said, and yet the contributions of people of color to its development often go unrecognised. “The descendants of enslaved Africans have created this beautiful fabric of culture and experience for the entire world to partake in.”

It’s impossible to ignore the influence pop-culture “rebels” like Elvis and James Dean had on the youthquake consciousness and their perception of denim. But its also obvious that the more complex, less whitewashed story of the revolutionaries on the front pages of newspapers truly helped denim become a staple in everyday people’s wardrobes.⁣⁣ “It took Martin Luther King’s march on Washington to make them popular,” wrote Caroline A. Jones, author of Machine in the Studio: Constructing the Postwar American Artist. “It was here that civil rights activists were photographed wearing the poor sharecropper’s blue denim overalls to dramatize how little had been accomplished since Reconstruction.”⁣⁣ 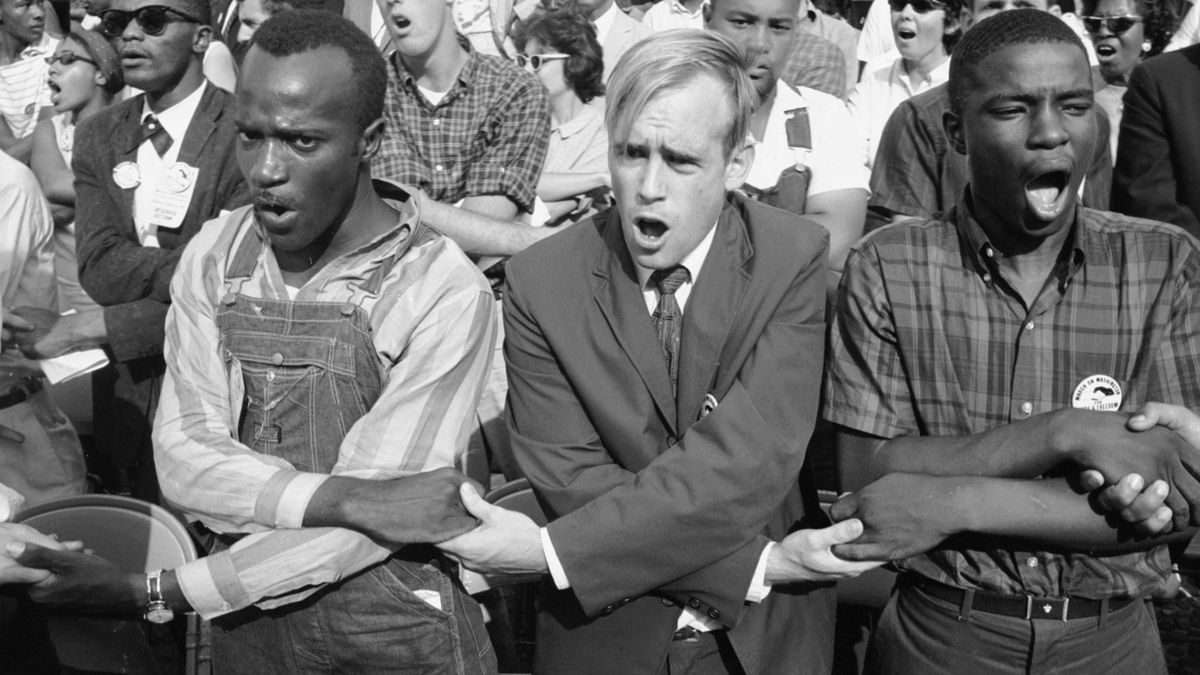 The Civil Rights movement began to unfold in the mid-50s, and ushered in over a decade of boycotts, sit-ins, and marches. Jeans were not only the preferred dress of some activists, but also a symbol of protest for the movement. In April of 1962, the town of Huntsville, Alabama, protested segregation in department stores by replacing Easter Sunday with “Blue Jean Sunday.” Clothing stores were estimated to have lost a million dollars in the boycott. As the social revolution continued to dominate the 1960s, denim-clad rebels adopted jeans to embody the changing times. Jeans were an essential wardrobe piece of the movement that protested the Vietnam War, questioned their parent’s values and the government, redefined gender roles and fought for social progress.

In a 2017 Racked article titled ‘What the Civil Rights Movement Has to Do With Denim’, editor Marlen Komar explains how activists wore overalls out of practicality — they were tired of mending tears from attack dogs and high-pressure hoses, as denim could withstand the abuse. “They used to be referred to as ‘Negro clothes’ — slave owners bought denim for their enslaved workers, partly because the material was sturdy, and partly because it helped contrast them against the linen suits and lace parasols of plantation families — and their inclusion in the civil rights movement suggested that pointed societal divide” Komar writes. 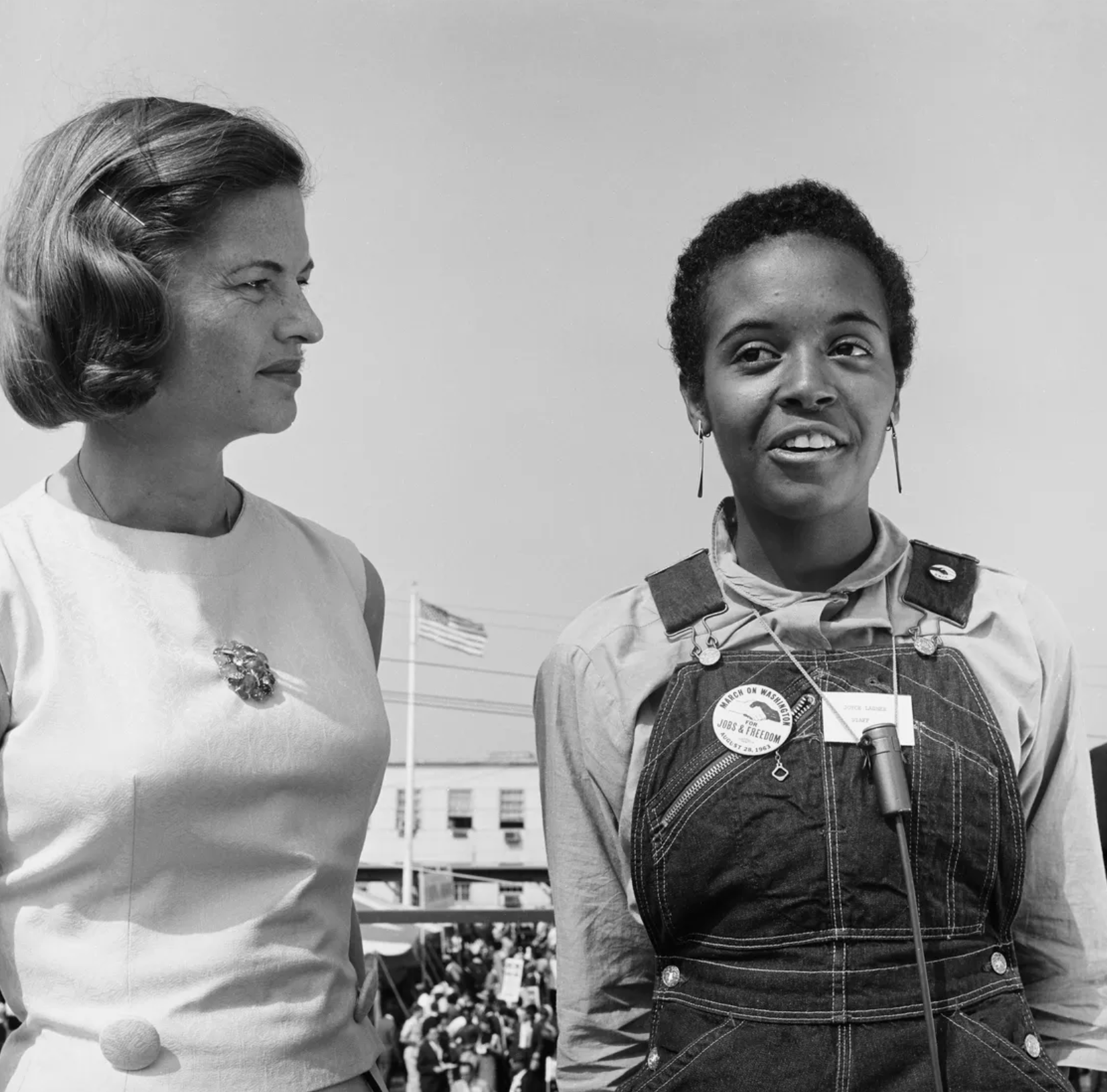 Activist and creator of Harlem-based sustainable denim brand Oak & Acorn, Miko Underwood traced the origins of denim, which was originally a poor quality cloth, most often made of cotton, linen, or hemp that was used by slaveholders to clothe the enslaved. This cloth was sewn into simple but durable workwear by slaves themselves. ” At that time, explained Underwood, this cloth was known as “Negro Cloth” or “Slave Cloth” and was “unfit for anyone else to wear except for slaves.”

For many Black Americans, jeans were a reminder of a not-too-distant past that was disrespectful to wear. “For many African Americans, denim workwear represented a painful reminder of the old sharecropper system. James Brown, for one, refused to wear jeans, and for years forbade his band members from wearing them” says James Sullivan, author of Jeans: A Cultural History of an American Icon. 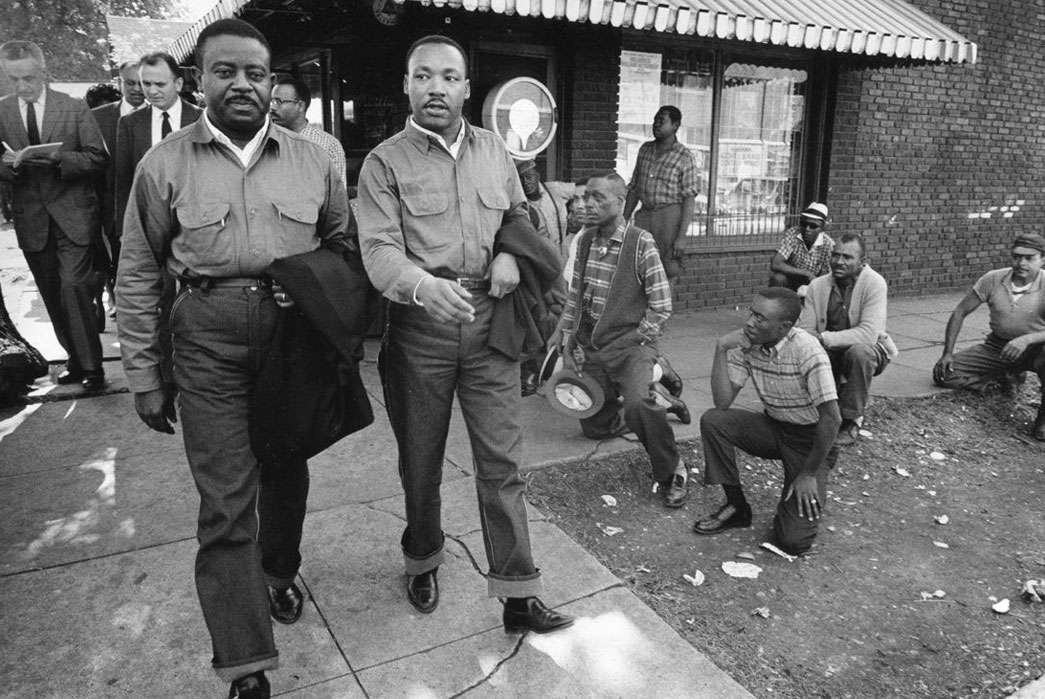 Denim wasn’t only worn for its comfort and durability, it became the symbol for solidarity and the struggle for equality and racial justice. Martin Luther King and Ralph Abernathy wore matching denim work pants and work shirts when they were arrested in Birmingham, Alabama in April of 1963—the detainment that would trigger King to pen his iconic “Letter from a Birmingham Jail“. For King and other black activists these weren’t styles adopted to suit their personal tastes, but rather an identity forced upon them by a racist system many gave their lives fighting against. King’s uniform would go on to inspire thousands of other black protestors to dress up in their denim in August of 1963 with King’s March on Washington. Over 250,000 took to the National Mall in America’s capital to demand civil and economic rights for Black Americans. These quarter-million included many of the workaday Black Southerners who wore their jeans, overalls and denim jackets to DC. 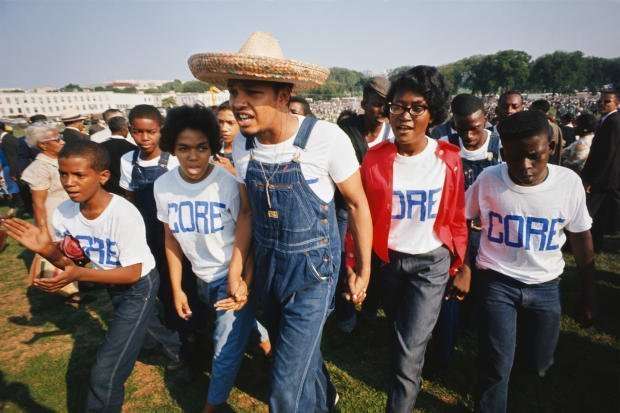 It wasn’t just the men who were protesting in their jeans either. In the article SNCC Women, Denim, and the Politics of Dress, Tanisha C. Ford explores why young black women activists abandoned their “respectable” clothes and processes hairstyles in order to adopt jeans, denim skirts, bib-and-brace overalls and natural hair.  The article details the story of seasoned student activist Anne Moody, who had attended the March on Washington wearing a dress, while her other delegates wore denim skirts and jeans. Ford details, “Moody’s realisation that she was overdresssed compared with her denim-clad peers speaks to an understudied aspect of Student Nonviolent Coordinating Committee (SNCC) history.” The choice of denim and natural hair was initially a response a response to the realities of activism; however, as the months and years progressed, the look became the so-called SNCC uniform. The women used the uniform consciously to transgress a black middle-class worldview that marginalised certain types of women and particularly displays of blackness and black culture. Not only did denim become a symbol of solidarity between SNCC activists and their working class peers but it was a uniform that allowed them to authentically display and articulate their southern, working-class, and African-American cultures. “Denim clothing became what I term a “SNCC Skin” attire that SNCC members believed had the potential to unite the young activists with the working class members of the communities they helped organise,” says Ford in the article. 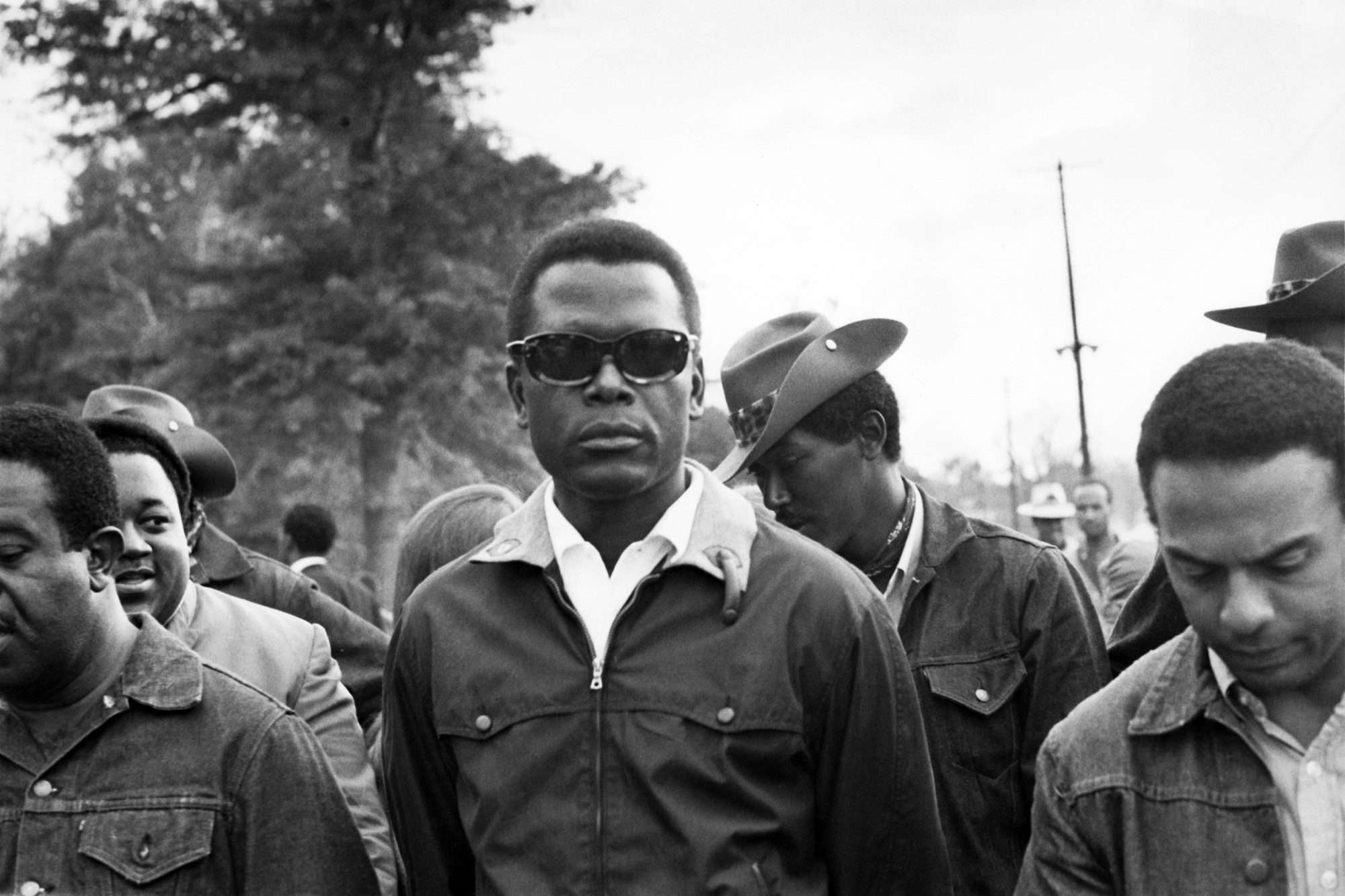 While denim became a symbol for the black freedom struggle, it wouldn’t take long before its most nonconformist messages was co-opted by American youth. The era would bridge the gap between denim as workwear to everyday casual wear and inspire future generations like hippies and beatniks to make it their own. “The Trucker code that Levis introduced in the ’60s at the height of the hippie heyday was basically a throwback to the denim bond jacket style that the working and sharecropper class has been wearing for decades,” Sullivan explains. “If it was cold enough to wear jackets, they would wear overalls or jeans, and then a barn jacket on top. The connection to the rural, back-to-the-land working class of the sharecroppers inspired, in some part, the all-denim, top-to-bottom look that hippies ended up wearing.”

At a time when the world fights against a racist system that continues to oppress black people to this day, it’s important to recognise the stories and struggles that many gave their lives to throughout history. Denim’s place in culture may have transcended its roots in workwear to become an everyday fashion item, but the ideology of influential figures like King and other black activists remain tightly woven into the fabric’s history. When you wear your jeans next, be sure to remember this chapter of denims past as clearly and loudly as the rest.

This article first appeared in a blog post for denimdudes.co. It was written by Samuel Trotman.