HERE IS WHAT YOU NEED TO KNOW ABOUT CRITICAL RACE THEORY

Watching the news or browsing social media, it would be easy to think that critical race theory is a complicated, controversial, or new idea.

But critical race theory, created four decades ago by legal scholars, is an academic framework for examining how racism is embedded in America’s laws and institutions. It is just now receiving widespread attention because it has morphed into a catchall category, one used by Republicans who want to ban anti-racist teachings and trainings in classrooms and workplaces across the country.

Over the past six months, Republicans in more than two dozen states have proposed bills that aim to stymie educational discussions about race, racism, and systemic oppression in the US — potentially eliminating the conversations altogether.

Together, the bills amount to a Republican scare tactic and disinformation campaign, and critical race theory has in some circles become a dog whistle that communicates resistance toward racial justice progress.

So what critical race theory actually . . .

Critical race theory emerged in law schools in the 1970s and ’80s as an alternative to the mainstream discourse and classes on civil rights law, many of which held that the best way to fight racial discrimination was to enact legal reforms. According to the doctrine of the time, when these reforms took root, they would eventually phase out racial discrimination. Critical race theorists saw this as a surface-level understanding of the role of race and racism in the law and instead posited that racism is endemic and institutionalized in the United States. For example, one legal reform can’t undo decades of housing discrimination that have kept Black people out of the housing market, nor can one bill end the health care inequities that created poor health outcomes for Indigenous communities.

Critical race theory also highlighted how, even when the law changed to increase racial equity, institutions disrupted the intentions of those laws and tried to get around them, according to Laura Gomez, a University of California Los Angeles law professor who co-founded the school’s critical race studies program in 2000. At its core, critical race theory identifies this dynamic: When the country takes two steps forward in the name of progress, racist forces push it a step back.

The late Harvard professor Derrick Bell is credited with establishing critical race theory through his publications and groundbreaking course Race, Racism, and American Law. The academic concept was further cemented in 1993 when a group of legal scholars — Mari Matsuda, Charles R. Lawrence III, Richard Delgado, and Crenshaw — published a seminal book on the theory, Words That Wound: Critical Race Theory, Assaultive Speech, and the First Amendment. “Individual law teachers and students committed to racial justice began to meet, to talk, to write, and to engage in political action in an effort to confront and oppose dominant societal and institutional forces that maintained the structures of racism while professing the goal of dismantling racial discrimination,” the authors wrote.

In addition to claiming that racism is endemic to American society, the authors put forth five tenets of critical race theory.

With this foundation, critical race theory has informed many disciplines, from education to political science to sociology, moving scholars across the country to investigate how race and racism impact their fields.

“Critical race theory is not one coherent school of thought. It’s simply an effort to confront our history of race and racism and to give us a capacity to think about what its implications are today,” Crenshaw said.

For decades, critical race theory — and discussions and criticisms of it — have mostly been relegated to higher education, with students studying the concept in college- and graduate-level courses. It’s not, despite what the Republican bills would have their constituents believe, being discussed in many elementary or high school classrooms. What has changed over the past year, though, is the growing conservative fear that schools and educators may want to reexamine what perspectives have been traditionally left out of American history lessons.

What critical race theory has come to stand for

The backlash began last summer as America was trying to reckon with racism in the wake of the police killings of Black Americans including Breonna Taylor and George Floyd, and millions of people in major cities and small towns protested for racial justice and helped change public opinion about racism. Organizations pledged to be anti-racist. The Merriam-Webster dictionary even changed the definition of racism to include how it is systemic. Events of the summer set off what appeared to be a sea change ahead of a pivotal presidential election.

In 2020, a month after the height of the protests, Fox News began airing segments featuring conservative activist and Manhattan Institute senior fellow Christopher F. Rufo, who on Twitter claimed that he was uncovering a new “cultural revolution” that was being carried out through corporate HR, government diversity trainings, and public school curriculums.

Later in the summer, he told Tucker Carlson that he was “declaring a one-man war against critical race theory in the federal government, and I’m not going to stop these investigations until we can abolish it within our public institutions.” He pointed to a total of six training sessions or programs in federal departments that told attendees that America was “founded on racism” and “built on the backs of people who were enslaved,” and that white people “benefit from racism.”

“My goal is simple: to persuade the President of the United States to issue an executive order abolishing critical race theory in the federal government,” he tweeted. Rufo appeared on Carlson’s show once more on September 2, and two days later, Trump issued an executive order banning federal contractors from conducting racial sensitivity trainings, emphasizing his desire to stop “efforts to indoctrinate government employees with divisive and harmful sex- and race-based ideologies.”

Russell Vought, the Office of Management and Budget director at the time, also released a memo instructing federal agencies to identify any critical race theory and white privilege training within their departmental training plans in an effort to stop funding any and all programming that suggests the “United States is an inherently racist or evil country.”

Conservative media celebrated the document as a win; in response to a Breitbart article about the memo, Trump tweeted on September 5: “This is a sickness that cannot be allowed to continue. Please report any sightings so we can quickly extinguish!” The Labor Department also launched a hotline to solicit complaints about training programs that violated the executive order. 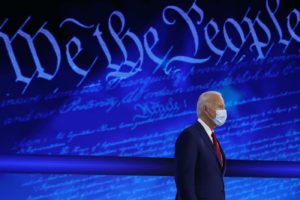 Immediately after being sworn into office, President Joe Biden rescinded Trump’s order, but the action became fuel for Republicans looking to abolish critical race theory and discredit the 1619 Project as part of their policy platforms. Since Biden’s inauguration, at least two dozen states have put related bills on the books.

“We’ve made a lot of progress,” Vought told me on a call. “Bills are popping up all over the place in areas where we have Republican governors and legislatures.”

Vought’s organization, the Center for Renewing America, along with others like the Heritage Foundation and the American Legislative Exchange Council, have created model legislation for lawmakers and school boards to adopt, released toolkits, and held webinars to strengthen the backlash against a problem they created.

Vought has declared that critical race theory is a top issue for his firm because it’s important to push back against the “false” idea that America is a systemically racist country, curb approaches that make value judgments about white people, and put a stop to the kinds of trainings that have gotten white male participants to write apology letters to women and people of color.

Regardless of their viability, the bills and the discussion around them have already captured the media’s attention, caused confusion as to what critical race theory actually is, and are now having a chilling effect at some educational institutions. In Oklahoma, a community college paused its fully enrolled summer course on race and ethnicity over fears of legal trouble. In Nevada, where critical race theory hysteria is only just beginning, a conservative group suggested that teachers wear body cameras to ensure they’re not teaching critical race theory. In Loudoun County, Virginia, a group of conservative parents is attempting to recall school board members after the district required teacher training in “systemic oppression and implicit bias.”

Ultimately, the controversy over critical race theory exemplifies a tenet of the theory itself: Any racial progress will be met with great resistance.